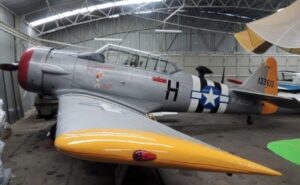 The Texan, rechristened a Harvard, has changed hands an extraordinary amount of times over the course of its existence, originally serving in the US Air Force before being transferred to the British Royal Air Force, who shipped it the the South African Air Force who held the plane for a couple of years before transferring it back to the UK who in turn sent it on to the Belgian Air Force who decommissioned it in 1959. 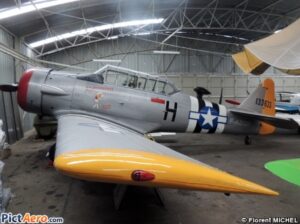 The plane was utilized by the Air France Training School in Cormeilles, France from 1959 to 1964 when it was sent to French Cameroon where it was in active use until the mid-70s. In 1986 the plane was returned to France in a very sorry state. The present owner, Gilles Carter acquired the plane in 1990 and with his partner Camille Milton, embarked on the daunting restoration project in the late 1990s.

The completed plane, appropriately named “Multipurpose Maid” given her history, has been refinished with US Air Force colors and markings, including the somewhat fanciful inclusion of “invasion stripes” in the crafts paint scheme.