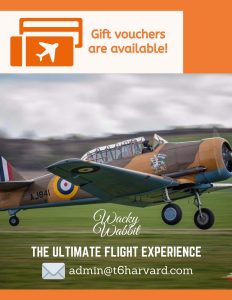 Start thinking about that special Christmas gift for your loved one 🎅🏼  – You will be pleased to know that we are back up and running and can offer Warbird Harvard flights from our prefered location at Peterborough Conington. Peterborough Business Airport is a privately owned airfield in the English county of Cambridgeshire near the villages of Holme and Conington, 7 NM south of Peterborough. Wikipedia

Dates available – The dates below are all provisional dates. We do our best to make sure that we have a minimum of 4 people booked in on any one day to make it viable. (See FAQs)  (See Ts and Cs)

OUR NEXT BIG DAY – BOOK NOW –  27th November at Peterborough Conington with a reserve weather day of the 28th November – Contact me to book as we have limited places! [email protected] 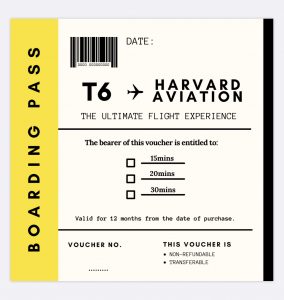 Get your boarding pass now ✈️

# 1 – Contact me directly and book via email. [email protected] 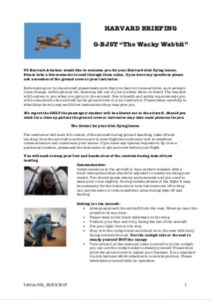 (Click on the notes left) Student notes are a handy pre-course piece of homework for anyone wishing to fly with us. These notes give information on how to board the Harvard and some small details on the commands to expect from the instructor. Harvard Briefing for students

Warbirds – Flying a warbird in the UK has been simplified by the CAA so that the general public can now fly in warbirds such as Spitfires, P-51’s and even as of recently the Buchón (Spanish built Messerschmitt) 109… There is even an option now to fly in a Hawker Hurricane 2 seater Hawker Restorations have completed there 2 seat Hurricane project! However, this all comes at a cost. Typically a Spitfire ride would cost you between £2500 and £3000 per 20 minute block time which comes under the CAA SSAC for this to be allowed.

Fly in the T6 Harvard and scratch that itch at a fraction of the cost and experience the sensation of a Warbird.

About the Wacky Wabbit 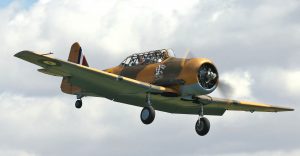 Approximately 80% of all allied fighter pilots flew this advanced trainer (AT) before progressing on to the fighters during WW2. Post-war it was used intensively as a ground attack, light bomber, target marker, and reconnaissance aircraft. (Harvard’s in combat) Harvard’s have an incredible fighter like quality. (Scroll down to see video evidence!)

If you want the ‘Warbird’ WW2 experience, then you should fly in the “Wacky Wabbit” Our Harvard has been painted with incredible accuracy to represent AJ841 which flew with the Desert Airforce from 1941 – 1946. AJ841 would have been responsible for training pilots in the North African campaign. As logbook evidence shows, she ferried many squadron pilots around from such places as Palestine to Aleppo in Syria during 1942.  Evidence also exists of her flying in Lybia and Egypt!

Don’t forget, if you would like to book us for a Harvard flying display contact us for more information, we can also book other warbirds such as the Hurricane and the Spitfire.

Our other services include

Take a look at our exciting T6 Harvard videos