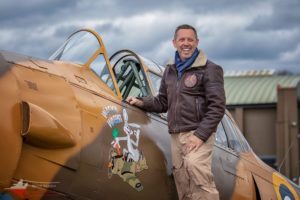 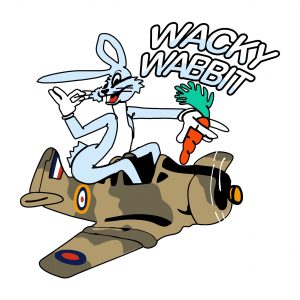 2 – All photography on this page is for advertising and publicity purposes. Please credit the photographer in all cases – Photography is by the extremely talented – Piotr Szydło  Piotr is not precious about his amazing photography and encourages you to use it; however, credit is always nice.

3 – This page’s material is ideal for display commentators and event organisers seeking information and media on the “Wacky Wabbit.” and its airshow pilots. If you require video footage, please click on this page—video footage or contact [email protected] for more information.

A company dedicated to keeping G-BJST Harvard MK IV (Nose art “Wacky Wabbit”) airworthy for public displays, Heavy tailwheel conversions, film work and Flying Experiences. The latter is to give pilots and none pilots the experience of flying in an authentic warbird. As custodians of a unique piece of aviation history, we would like to share our passion with others so that they can experience the thrills of flying or seeing a warbird up close and personal. These aircraft are not cheap to run, so we have to work her hard. To that end, we are always looking for opportunities and sponsorship to keep “The Wacky Wabbit” in the air where she belongs. 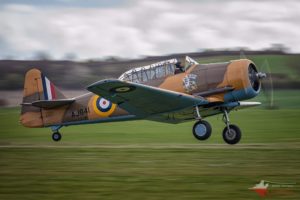 Harvard G-BJST  – was built in 1953 by the Canadian Car and Foundry Company (C&CF) as a model Harvard 4. It was built for the USAF under the Mutual Development Assistance Program (MDAP) due to Military officials calling to introduce legislation to expand suitable military training equipment.

After the North Atlantic defence treaty negotiation, there was a requirement to provide military aid to strengthen member countries against the communist threat in Europe. As part of an order placed in 1951 by the USAF, aircraft were supplied to the French, German, Italian, Turkish, and other Airforce’s to help speed up their recovery after world war two. Apparently, under contract number AF-20641, two batches of T-6 were manufactured by the CCF. The first batch consisted of 143 aircraft, with 69 going to Italy, 24 to Belgium, and 51 to the French Air Force. 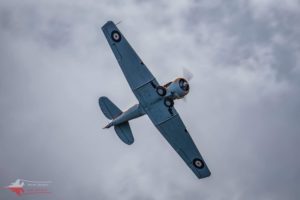 Transformation to AJ841 – T6 Harvard Aviation Ltd Decided in August 2014 to repaint G-BJST in a new colour scheme for 2015 as the current paint was looking rather tired. The idea to paint her as a former RAF Desert Air Force (DAF) MKII Harvard was suggested by Andrew Goodall to the group, and it was agreed. Andrew subsequently acquired sponsorship from RS Paintwork (now Purple aviation located at Eshott airfield), and the transformation began.

Andrew Goodall and Martin Pengelly carried out meticulous research into a Harvard that served in the North Africa campaign with a Duxford connection. AJ 841 was found to have a relationship with Duxford as she saw service with 154 Squadron. Originally 154 Squadron were based just to the West of RAF Duxford at RAF Fowlmere before deploying to the Middle East in 1942. Record cards for 154 Squadron show the squadron Harvard (AJ841) being flown by flying officer DC Dunn from Minnigh (Syria) to Ramat David (Palestine) on the 12th February 1944. 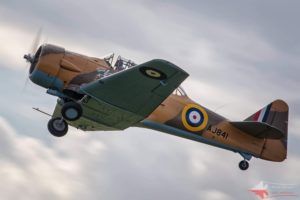 AJ841 – AJ841 was also logged with “243 squadrons” on the 11th January 1944 flying from “Syria” Allepo to Petah Tiger in Palestine with the pilot named as F/Sgt Ernewein and passenger marked as ‘Self” The return journey was made from Palestine back to Aleppo on the 16th January 1944 this time with the pilot “Self” and the passenger F/Sgt Ernewein. The logbook marked on this page as “243 Squadron Allepo Syria  1944” seems AJ841 had a busy life as a general hack used by many squadrons.

We approached the RAF in 2014, and permission was given for G-BJST to now carry the codes AJ841 and the RAF colours and markings – Then the transformation began! 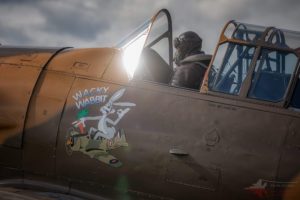 Harvard AJ841 – AJ841 was shipped directly from the USA to the Middle East on the 23rd November 1941 on the steamship M Livanos, and she was struck off charge on the 25th April 1946. During her time in the Middle, East AJ841 saw service with 74 OTU to train and acclimatise fighter and army cooperation pilots to desert conditions. Records show that Harvard’s in this area were used to convert and continue training pilots on to the Hurricane and Spitfire. Photograph left – Jonathan Rasmussen,

The birth of the  “Wacky Wabbit.” 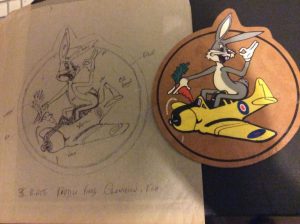 Why the “Wacky Wabbit”? – The logo was added purely for marketing purposes. Andrew found the design on the internet on a WW2 patch that was for sale on eBay. Andrew decided to use the design and colour in the yellow Harvard with British Desert Camouflage. Nothing was known about this badge other than it was a cool design and would look nice on the aircraft. By pure chance, Andrew was contacted by Chris Applegarth, whose father was in 5 BFTS in 1945 and had the original design! Unbelievable coincidence!

Provenance – Good evening, Andrew. Sorry for the delay getting back. The details of the badge were in some of my dad’s old documents. He had a tracing of one. Subsequently, I met several 5 BFTS students who also had their own. They were painted on leather-like yours. – Chris Applegarth

Andrew slightly modified the design further and gave it the name “Wacky Wabbit” he wanted to call it “Wicked Wabbit”; however, that was taken by a famous P47 Thunderbolt! The kids love it, and it gives this beautiful Harvard an identity. Andrew comments that he also has to give Richard and Sam of Eshott Airfield credit to help choose the name and convince him to add it to both sides of the Aircraft. And so the Wacky Wabbit was born!

Historical Chronology of G-BJST from 1953

The below Seven high-resolution photographs have been photographed by the incredibly talented – Piotr Szydło Please view his Facebook page. Please download and use it for any T6 Harvard Ltd business with full permission from the photographer. 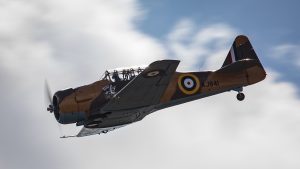 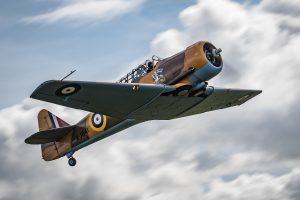 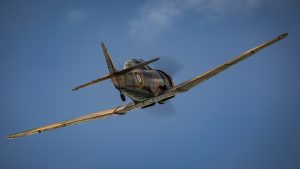 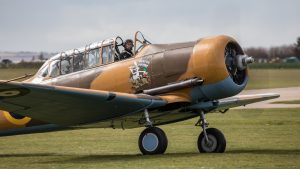 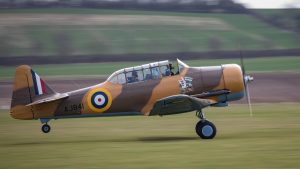 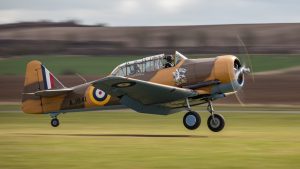 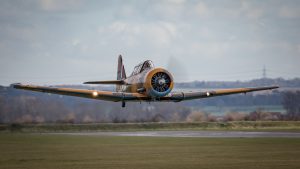