🎥 What can we offer?

We have hired out the “Wacky Wabbit” T6 Harvard on many occasions for Film and Media work. If you would like to hire our stunning Harvard, please contact me at [email protected]

🎥 We have worked with the following Film and Media productions. 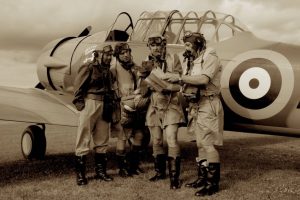 🎥 About AJ841 – Our Desert Air Force (DAF) Harvard AJ841 is available for film or media work. The Harvard provides an excellent prop for any WWII period setting. The Harvard was the primary advanced trainer and company ‘Hac’ during WWII and was ubiquitously seen on airfields not just in the United Kingdom but Worldwide. We are proud to say that the camouflage scheme, serial number and RAF decals are totally authentic to an aircraft that did exist from 1941 – 1946 down to the last detail.

🎥 Flying – Our Harvard looks not only great but also flys great as well, having a full certificate of airworthiness and on the public transport register. This means that with one of our instructors, you may even take the controls during flight.

🎥 Static Display – Available also for static ground display and filming. As you can see from the gallery, she is just as stunning on the ground as she is in the air.

🎥 Authentic Uniforms – We have a wide selection of British and American WW2 uniforms and flight gear available. We can supply consultants to ensure your film shoot’s historical accuracy is completely accurate for any wartime period. Kit and equipment changed many times between 1939 and 1945, and we strive for authenticity.

🎥 FILM AND MEDIA – SOME OF OUR MOMENTS OF FAME 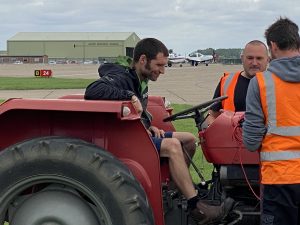 Guy Martin (born 4 November 1981) is a British motorcycle racer, television presenter, and heavy vehicle mechanic. Martin started racing in 1998, and in 2004 competed on a road circuit for the first time at the Isle of Man TT. He has a total of 17 podium finishes at TT events over several years. 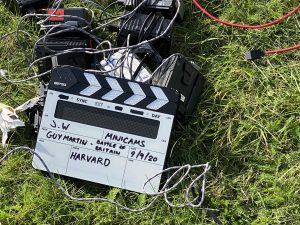 In the 2010 TT and the 2015 Ulster Grand Prix, he has broken his back twice in racing accidents. In July 2017, Guy Martin had retired from motorcycle racing. In August 2017, Martin joined Formula 1 car team Williams’ pit-crew for the Belgian GP. Martin returned to road racing in May 2019 at the Tandragee 100 in Northern Ireland. Martin starred in Closer to the Edge, a 2011 documentary on TT racing. He has since presented programmes on various engineering topics and the Channel 4 series Speed with Guy Martin when he set speed records in various human and engine-powered vehicles. He has authored four books and competed in mountain bike pedal-cycle races. 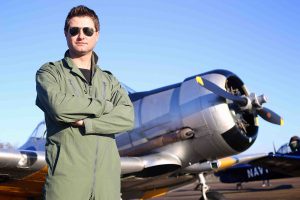 Restoration Man – 11th February Channel 4 at 8.00 p.m. Brown has big ideas about turning a15,000 sq ft historic WW2 RAF bunker into his new home. However, with the bunker totally encased in earth, with no natural light, and the back section submerged in water, his wife, who is about to have their first baby, isn’t sure. With its fascinating history and draw-dropping engineering, George helps Jamie tackle this huge bunker and discovers the Coventry Blitz’s important role.

At the Bunker before restoration – Furniture maker Jamie Brown has big ideas about turning a colossal and historic 15,000 square foot RAF bunker from World War II into his new home. However, with the Nottinghamshire bunker totally encased in earth, with no natural light, and the back section submerged in water, Jamie’s wife, who is about to have their first baby, isn’t so sure. With its fascinating history and jaw-dropping engineering, George helps Jamie tackle this huge undertaking and discovers the important role in the blitz. Filmed at the Duxford Imperial War Museum

The Harvard bears a resemblance to the Japanese Mitsubishi Zero and, to this end, makes the Harvard perfect aircraft of choice for WW2 Japanese movie reenactments. Many T6 Harvard’s were converted for the film ‘Tora Tora’, and G-BJST was actually used in the film ‘Empire of the Sun’

Harvard (G-BJST) was used during the making of the film ‘Empire of the Sun” It is shown here (left) painted up to look like a Mitsubishi Zero. Apparently, she was used as a ground prop surrounded by explosions in one of the bombing scenes. Unfortunately, we don’t have any further information on its staring roll!

Apparently, at this time, G-BJST was part of the Jeff Hawks collection that supplied aircraft to the film industry. If you have any further information on its part in the film, please let us know.

Please take a look at our exciting T6 Harvard videos