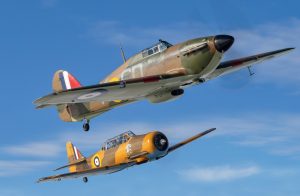 Seeing the Hurricane on the wing tip of the Harvard is a sight to behold! From personal experience, I was overcome with emotion when I first witnessed the Hurricane flying in close formation with me over the skies of Cambridgeshire. First, the noise, the smell of petrol, oil and leather sat inside the Harvard as she rumbled along, and then the visual experience of seeing the unsung heroes of the battle of Britain, “The Hurricane”, was awe-inspiring! Words can not justify seeing this majestic fighter in her natural environment! The MK1 Hawker Hurricane you shall be flying wing to wing with is V7497, a genuine Battle of Britain veteran with the original Rolls Royce Merlin III engine. This Hurricane flew with the famous 501 Squadron RAF in 1940. (Photography Darren Harbar)

T6 Harvard Ltd is now offering this unique opportunity for the few just a couple of times per year during June, July and August to celebrate the Hurricane’s Hardest days during the battle of Britain to give this flight that extra unique emotion and sensation. “I have goosebumps just thinking about this”! 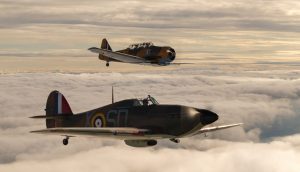 We operate the Harvard from Fowlmere airfield, the iconic Battle of Britain fighter base, where we shall scramble in the T6 Harvard “The Wacky Wabbit” into the skies of Cambridgeshire and climb to Angels 2000 feet and above.

During the first part of the sortie, you will take control of this magnificent aeroplane from the rear seat and patrol the skies around the 12 group sectors waiting for your wingman in the Hurricane to join you; this flight time can be logged in your flying log book! While you wait in anticipation for your Hurricane wingman to join you, the instructor will demonstrate some “Classic” fighter dog fight manoeuvres s you may experience the g forces pilots to face in real-life combat. 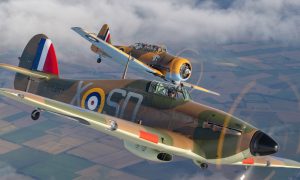 During the second half of the sortie, your wingman will appear in the Hawker Hurricane alongside. With Harvard now under the control of your instructor, this will allow you to take in the visuals of this breathtaking flight of a lifetime!

You will have a free video capturing the Hurricane on the wing, a memory you can take away on a USB immediately after landing.

What you get from this flight: