Chipmunk tailwheel conversion: If you would like to Fly the Harvard, the first step has to be getting your tailwheel endorsement and the perfect aircraft to do this on is the DH Chipmunk. We can now offer expert training on the Chipmunk and get you up to solo standard; this is the ideal way to transition to the mighty Harvard. The training on the “Chippy” shall be tailored to be taught in a way that prepares you for the T6 Harvard.

If you want more information on gaining your tailwheel endorsement on the Chipmunk, contact us at: [email protected]. 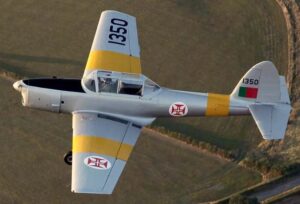 The de Havilland Canada DHC-1 Chipmunk is a two-seat, single-engined primary trainer aircraft designed and developed by Canadian aircraft manufacturer de Havilland Canada. It was created shortly after the Second World War and sold in large numbers during the immediate post-war years. It is typically employed as a replacement for the de Havilland Tiger Moth biplane.

The Chipmunk was the first postwar aviation project conducted by de Havilland, Canada. It performed its maiden flight on 22 May 1946 and was introduced to operational service that same year. 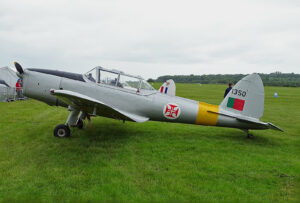 During the late 1940s and 1950s, the Chipmunk was procured in large numbers by military air services such as the Royal Canadian Air Force (RCAF), Royal Air Force (RAF), and several other nations’ air forces, where it was often utilised as their standard primary trainer aircraft. The type was produced under licence by de Havilland in the United Kingdom, who would make the vast majority of Chipmunks and OGMA (Oficinas Gerais de Material Aeronáutico) in Portugal.

Below: Chasing the Chippy in the Harvard “Wacky Wabbit” Trying to stick with the Chipmunk and its 145hp De Havilland Gipsy Major engine at a weight of approximately 2000 pounds and the Harvard with 600 horsepower weighing in at around 5700 pounds… on a rough day 😅 it was pretty easy to formate on however I had the power on the Harvard way back which Is not great for the engine so a quick photo opportunity before I powered up and accelerated away!

The type was slowly phased out of service beginning in the late 1950s. However, in the ab initio elementary training role, this did not happen in the Royal Air Force until 1996, when the Scottish Aviation Bulldog replaced it.

Many Chipmunks that had been in military use were sold to civilians, either to private owners or to companies, where they were typically used for a variety of purposes, often involving the type’s excellent flying characteristics and its capability for aerobatic manoeuvres. More than 70 years after the type had first entered service, hundreds of Chipmunks remain airworthy and are in operation worldwide. The Portuguese Air Force still operates six Chipmunks, which serve with Esquadra 802, as of 2018. 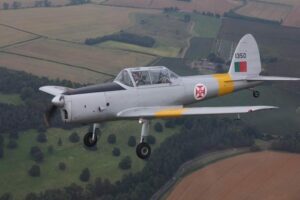 The de Havilland Canada DHC-1 Chipmunk is a two-seat, single-engine aircraft that has been heavily used as a primary trainer aircraft. The basic configuration of the aircraft included a low-mounted wing and a two-place tandem cockpit, which was fitted with a clear perspex canopy that covers the pilot/student (front) and instructor/passenger (rear) positions and provided all-round visibility. The Chipmunk uses a conventional tailwheel landing gear arrangement and is fitted with fabric-covered flight control surfaces; the wing is also fabric-covered aft of the spar. The Chipmunk exhibited a gentle and responsive flight attitude in terms of handling. Early production aircraft were semi-aerobatic, while later production models were almost all fully aerobatic.

The structure of the Chipmunk makes heavy use of metal, the majority of the airframe being composed of a stress-skinned alloy; this allowed the adoption of thinner wings and consequently provided for increased performance and a greater degree of durability. 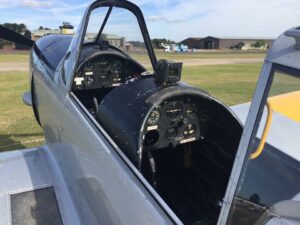 In addition, numerous features were incorporated so that the type could better perform as a trainer, including hand-operated single-slotted wing flaps, anti-spin strakes, disc brakes on the wheeled undercarriage, a thin propeller composed of a solid lightweight alloy, the adoption of an engine-driven vacuum pump in place of external venturi tubes to power cockpit instrumentation, electric and Coffman cartridge engine starters as alternative options, cockpit lighting, onboard radio system, and an external identification light underneath the starboard wing. In civilian service, individual aircraft would often be modified. Examples of these adaptations include extensive modifications that enabled it to perform competitive aerobatics, for which aircraft are often re-engined and fitted with constant speed propellers and inverted fuel systems; more significant numbers of Chipmunks have been tasked as dedicated glider tows. As a result, it has become commonplace for Chipmunks to be re-engined, typically using the 180 hp Lycoming O-360.